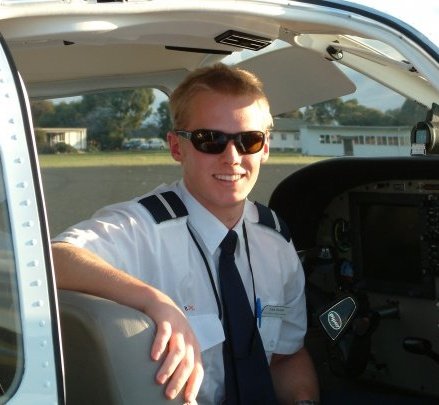 The first day of flight school is a little bit like the first day of high school. I remember sitting in a new classroom with 20 other new cadets who I’d be spending the next year with, all wearing new uniforms that still didn’t quite fit or feel right. The main difference, I was excited to finally be learning and studying something I was really interested in, that was also directly related to my future goals.

I also couldn’t wait to start flying!
For 2 months, waiting is exactly what we did!
The flight school was still waiting to receive its AOC (Air Operators Certificate.) Which meant the flight school, wasn’t yet a flight school, legally.  There were students, planes, instructors and classrooms, but no legal piece of paper. This gave me my first lesson in aviation. “Aircraft don’t fly without the right paper.”

There are always teething problems when entering into a new venture. This delay was one of them.
We were REX002, the second ever Regional Express Cadet course, REX001 had started 3 months earlier. Even they were still sitting around waiting for their first flights.
For me, it wasn’t a big problem sitting on my butt playing Microsoft Flight Simulator for 2 months. It wasn’t costing me anything. But for a few of the older guys, they were starting to feel the pressure. They had given up well-paying careers in other industries to pursue their dream career in aviation. They knew they’d have to support their families for another 2 or 3 months longer than expected without a paycheck. I’m not sure how they did it, but they managed.

After two months of poorly utilised time on my behalf, we finally had an AOC. New training aircraft were also arriving every few weeks.

The first few flying lessons flew by, before I knew it, with no more than 8 hours in my logbook, I was ready to go solo!

Having completed a lesson of circuits (Take-off and landing practice) I taxi the small, single engine aircraft into the apron area with my instructor sitting beside me. Before pulling onto the parking position, he instructs me to, “Just stop the aircraft here.” I set the parking brake. “Do exactly what you just did then to a full stop landing,” he says while unbuckling his seatbelt. He climbs out of the cockpit, closes the door and waves me off with ‘a thumbs up’.

It is a crisp June morning in Mangalore, Victoria. Clear blue winter skies and still air; a perfect day for flying. And I am about to fly solo for the first time!
I take a calming breath in and out to re-focus. I reach down and release the parking brake of the small 4 seater aircraft. “Mangalore Traffic, Piper Warrior, xray delta echo, taxing for circuits, Runway Three-Six” I broadcast over the radio. The aircraft creeps forward under the pull of the Idling propeller. One hand on the throttle, the other on the yoke, my feet placed on the rudder and brake pedals controlling direction and speed. I start my pre-take-off safety checks as I have rehearsed many times before. I am back in the zone.
Lining up on the runway, I take another deep breath to settle my nerves and focus.

I push the throttle all the way forward; the engine roars with full power. Without the 70 kilogramme instructor beside me weighing the aircraft down, it accelerates faster than I’m used to. “Airspeed alive”, at 60 knots I rotate. The aircraft leaps into the air, I set the attitude and before I know it I’m on the downwind leg of the circuit at 1000feet

above the ground. I glance to my right to see an empty seat. I smile to myself, I’m flying solo!  –  I still have to land this thing and that’s the hard part! So I get back to work. I perform me before landing checks like a well-programmed robot, I manoeuvre onto base then final, rolling out on the centre line and selecting the last stage of flaps. The picture looks good. I just need to keep it on the runway centreline and stable.

I close the throttle over the fence gliding the little plane onto the runway. I can’t remember whether it was with a smooth touchdown with a gentle squeak of the tyres or a rough thud. Probably a thud, but I didn’t care I had landed safely! And as they say, “any landing you walk away from is a good landing.”

I pull the aircraft off the runway on to the first taxiway, perform my after landing checks and bring the aircraft to a stop on its parking position in front of the Instructor and shut down the engine.
I fling the door open and climb out; I feel like Tom Cruise in that scene from Top Gun, where Maverick climbs out of his F-14 Tomcat for the last time!

That famous electric guitar riff is playing in my head. Disappointingly the Instructor doesn’t say that I can be his “Wingman any time.” But he congratulates me and shakes

my hand. I guess that’ll do.

Every pilot’s first solo flight is a very memorable milestone. That night we made a tradition of swimming a lap of the freezing pool in uniform. That tradition lasted a whole month until the pool was drained for maintenance over winter. 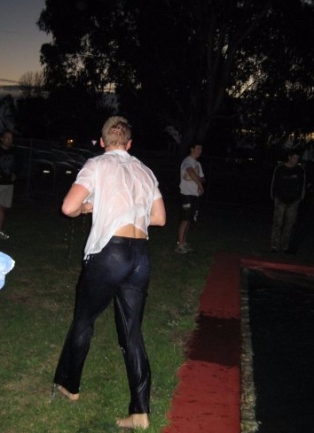 As 2008 wore on, we experienced many more disruptions as the school struggled its way through infancy.
The Australian aviation industry was beginning to watch us like Guinee pigs. Qantas had just abandoned their cadet program. While our flying academy was going through organisation and ownership changes; transitioning from Civil Aviation Training Academy (CATA) to Australian Airline Pilot Academy (AAPA). This included new managers and chief pilot.
There was quite a lot of doubt and controversy; everyone seemed to have their opinion. It was a hot topic on PPRUNE (Professional Pilot Rumour Network). We didn’t know what lay ahead or what to expect. But this was all part of being amongst the first to try something new. So I just stuck with it; we were making progress at least. And that was the main thing.
AAPA eventually established a new home in Wagga Wagga in 2009 where it has matured into a top quality flight academy.

I progressed from my first solo flight to navigation flights and completing theory exams. Then also onto failing a flight test and getting myself lost somewhere in the countryside, it happens to the best of us. I’ll tell you about it next time.